Come and join the discussion of this new map in the dedicated Firebase Z forum.

The countdown has finished, Firebase Z has arrived!

The Stuff We Want In Black Ops II 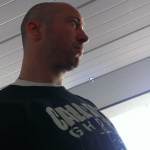